A history of toy steam in Sweden

Here I will fill add various information about retailers, manufacturers and other stuff relating toy steam history in Sweden. Click on the images to see them in larger size. Click on the link [Sources] under each section to see the references.

If you have additional information, opinions, or find errors, please mail me at info@peters-toysteam.se

The story begins sometime around 1880 when the first commercially manufactured steam engines are produced in Germany, mainly in the toy city of Nuremberg. The steam engines find their way also to Sweden via retailers.

One of the earliest importers of toy steam appears to have been F. Gustavson in Gothenburg. In 1888, the catalogue has an assortment of steam engines in the price range from 5kr up to 100kr, which was a considerable sum at the time. However, it seems that this is not a success as he two years later sales out parts of the assortment, including steam engines. Unfortunately, there are no pictures of steam engines, but they are referred to only in text.

Stockholm also had their retailers as Numa Peterson, who already in 1878 had steam engines in their assortment. The catalogue from 1889 shows a huge assortment of steam engines from Ernst Plank in Nuremberg

Numa Peterson began as a pharmacist in Vadstena in 1874 before he left the profession to engage in business activities. He was technically minded and had a large store at Hamngatan in Stockholm, where he sold photographic items as well as toys and phonographs. In addition to this, he had also a major sale of chemical and physical devices and medical equipment. Numa Peterson also manufactured cameras and other technology products, including taxi meters for the first cabs. The company became the purveyor around 1890 and opened several shops in Stockholm. At Numas' death in 1902 it was taken over by his son Mortimer and was declared bankrupt years later in 1911.

During the latter part of the 1890s Albert Brunskog in Eskilstuna had an assortment of steam engines. Again missing images as they only are described in the text.

Otto Grahn established as early as 1886. In the Christmas catalog from 1898 are a number of steam engines. These seem to be of German origin, and then probably made of Schoenner in Nuremberg.

Swedish manufacturers at the beginning of the century, 1900-1920

One of the first, and certainly one of the most skilled in terms of technical knowledge was Lars Nilsson, who during his active period between 1899 and 1916 produced a great variety of different models. Everything from a simple vertical oscillating model steam locomotive to advanced steamship. He had his shop in central Stockholm where he sold his toys in the Christmas season.

Click here to see more of his production and history. 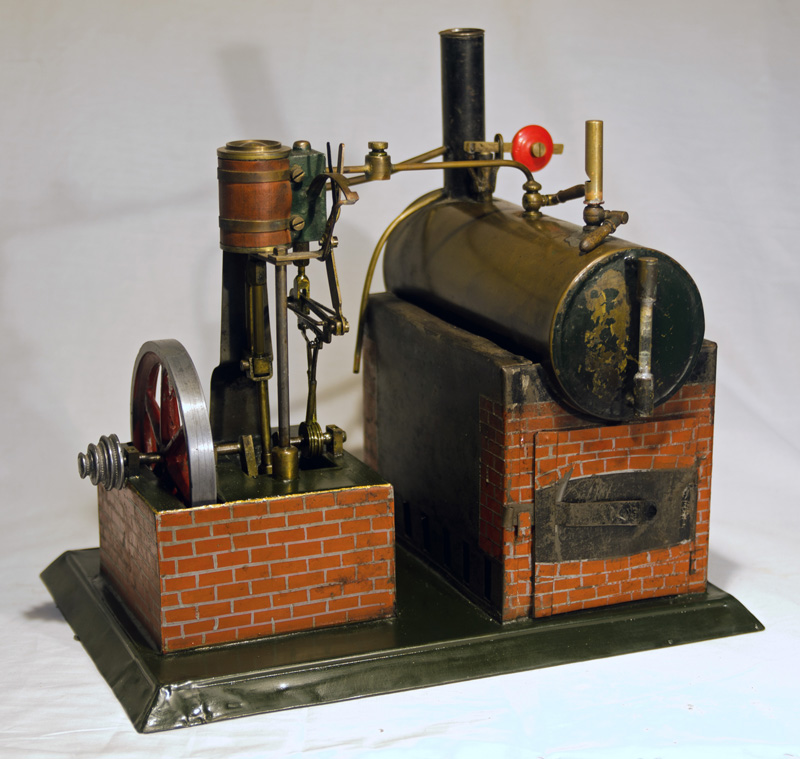 The first ad, published in Dagens Nyheter in December 1899. He returns to Döbelnsgatan until 1906, then he moves around at different addresses in Stockholm. 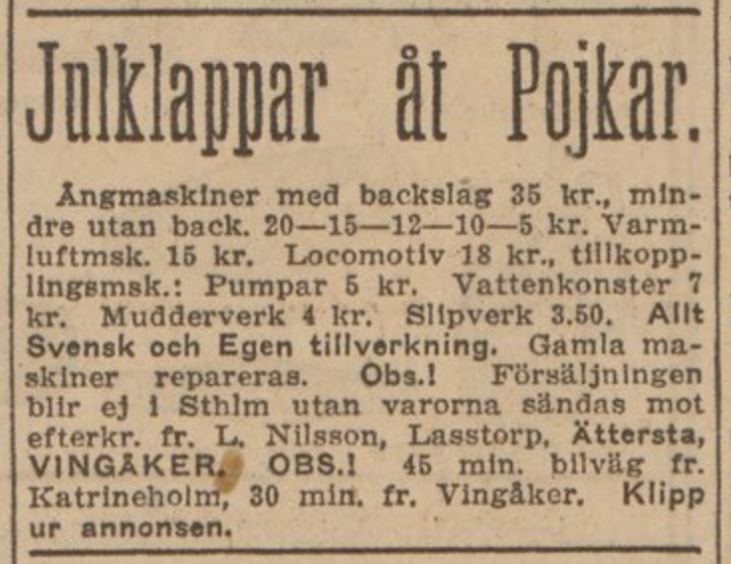 Ad in Svenska Dagbladet, December 1915. For the first and only time he is away from Stockholm. Notably, the price list with the different models.

Ad in Svenska Dagbladet, December 1916. He is nack in Stockholm for a last time before his production cease. This is the only time he use the name "Svenska Leksaksaffären" (Swedish Toy Shop)in his ads.

Click here här to see more of his production and history. 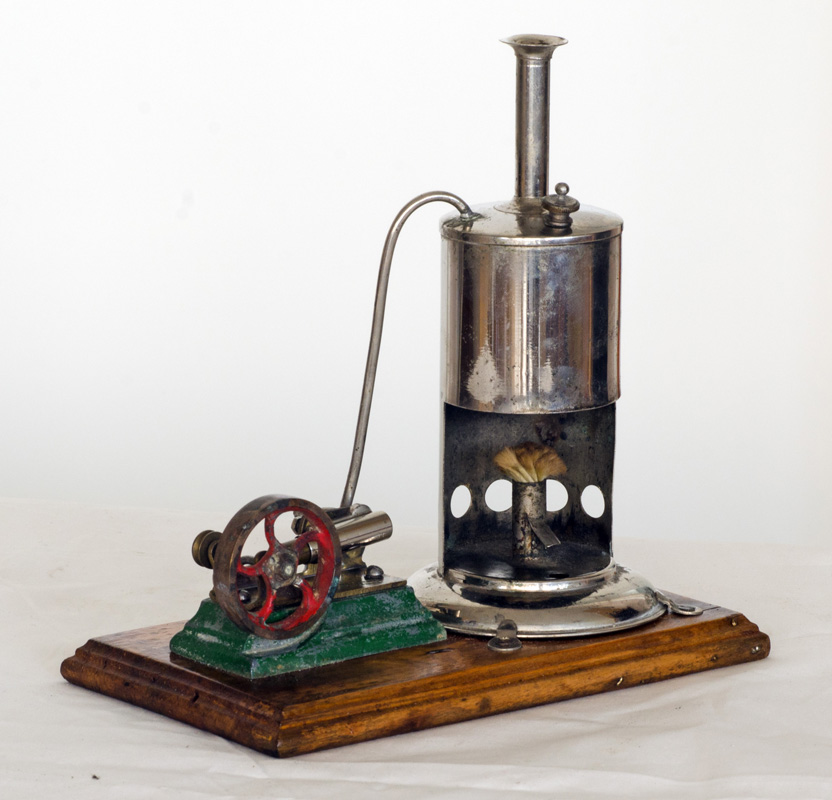 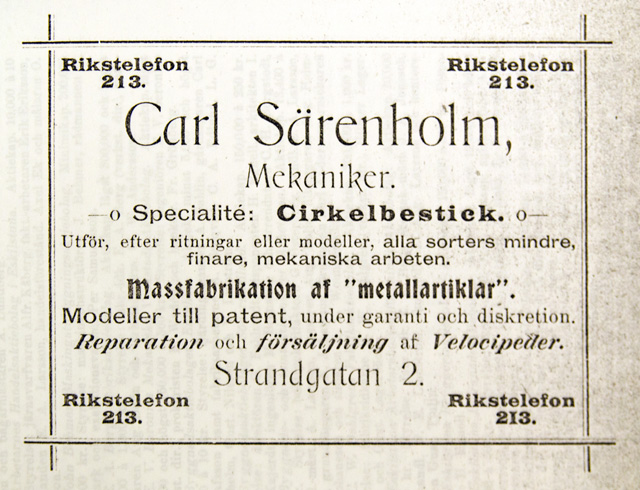 Despite the name, Forsners Photographic Magazine also had a really wide range of technical articles and mechanical toys. The company opened in Stockholm in 1902 and was active until 1933/34 when the toy department formed their own company, Mekanex (see below). The catalog from 1911 contains over 50 different steam engine variants imported from the German manufacturers, Bing, Joseph Falk and Carette. Prior Christmas they had large ads in the big Swedish newspapers.

Forsners 1911 - with a large assortment of steam and hot air engines from German producers.

Forsners 1926 - steam engine from Bing based on a popular American model, the Weeden model 14.

When Forsner closed their business in 1933/34, a new company was founded based on the toy department. This new company, Mekanex, became one of the biggest toy stores in Stockholm and finally went out of business in 1965.

Dagens Nyheter, Christmas 1940. Business as usual despite the war.

Dagens Nyheter, summer 1941. A reminder that no luxury taxes applies to toys.

Other photographic resellers also had toys in their repertoire. In an advertisement in the Swedish newspaper Svenska Dagbladet from the time around 1910 Hasselblad Scholander draws attention to its Christmas exhibition in Stockholm.

A classic shop with regard to steam engines are Eskader in central Stockholm. They opened up already in 1931 and sold their first steam engine in 1933. In addition to being retailers they have also developed a couple of models, including an ADE machine designed for use in boat models. Even today there have a large assortment of steam engines, mainly from Stuart, Wilesco and Mamod. 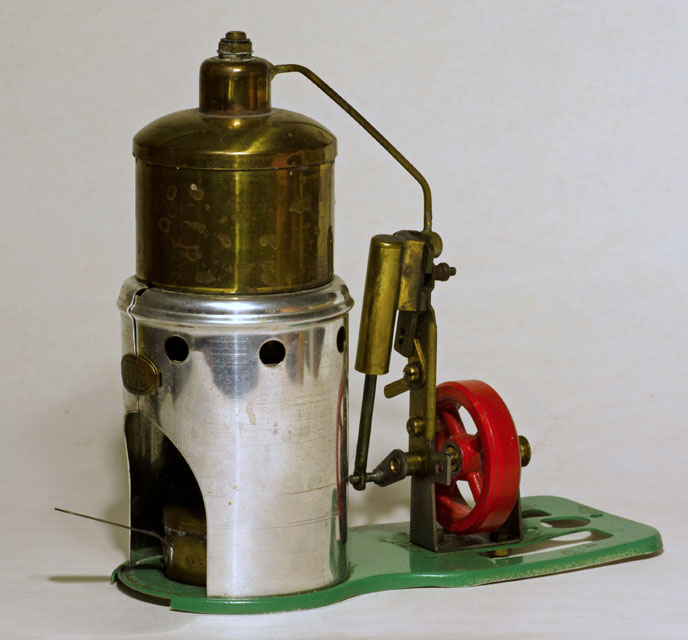 Steam engine made by ADE for Eskader.

Wentzel was established in 1934 and is mainly associated with model model building, trains, airplane, ship models, toy soldiers etc. In 1950 they did however also have some steam toys in their assortment.

In the catalog from 1909, there are four different steam engines, probably of German origin. The catalog there are also dynamobiles and even an automobile from the German maker Hess. Even later catalogs contain a small assortmenr of steam engines from German manufacturers.

Nordiska Kompaniet had its own steam engine of the oscillating type and relatively large. The base plate was made of masonite.

PUB sold a steam engine under its own name, 'Pubs steam engine'. The machine may have been manufactured by the EHÅ factory as it has a lot in common with these machines.

The mail order company, Clas Ohlson was established in Insjön in 1918. They have had steam engines in its range for a long time, and even today they sell Wilesco steam engines. During the 1930s they imported German steam engines from among others Doll & Co. From the late 1940s to the early 1960's there were several different models from the Swedish manufacturers, mainly ADE who was also from Insjön. The Swedish machines were replaced by mainly Wilesco in the early 1960s, which is also visible on the front of the catalog with a range of Wilesco machines.

Following WWII there was a need for toys. With large parts of Europe still in ruins, there were opportunities for Swedish workshops to manufacture steam engines for the domestic market.

Perhaps the most successful manufacturer of steam engines was August Danielsson from Insjön in Dalarna with his company ADE. He had started his company in 1914 with the manufacture of electrical products and later also toy motors. In 1947 he begins to manufacture a steam engine, followed a few years later by a locomobile and a tractor, all based on the same boiler and machine. He also had a patent on the machine part that was of oscillatory type with forward and reverse time.

The sale was made partly in its own bazaar adjacent to the factory, but most were sold through Clas Ohlsson, from the same small town as ADE. ADE also made a model for the retailer Eskader in Stockholm.

The company had at most around 5-6 people employed and was active in the 60's when it was closed down due to age reasons.

Click here to see more of ADE production and history. 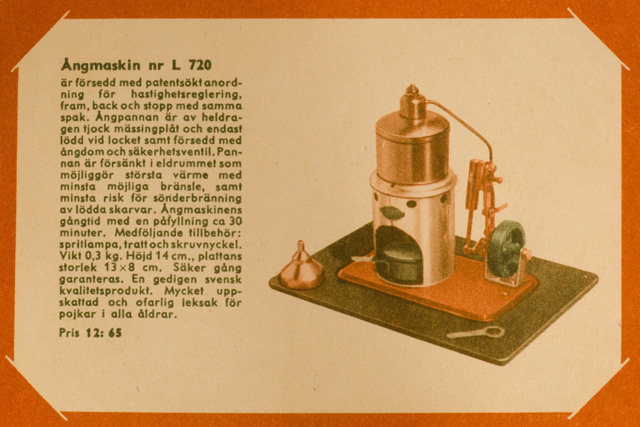 Ad in Clas Ohlsson catalog from 1947. 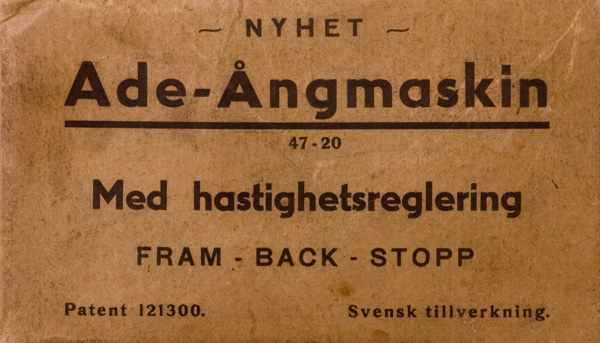 A rather unknown manufacturer is brothers Fernström from Stockholm. They made a simple horizontal machine with oscillating cylinder. The fire house has a painted brick imitation. Their engines could be found in the 1946 christmas advertisment from Swedish retailer Nordiska Kompaniet. 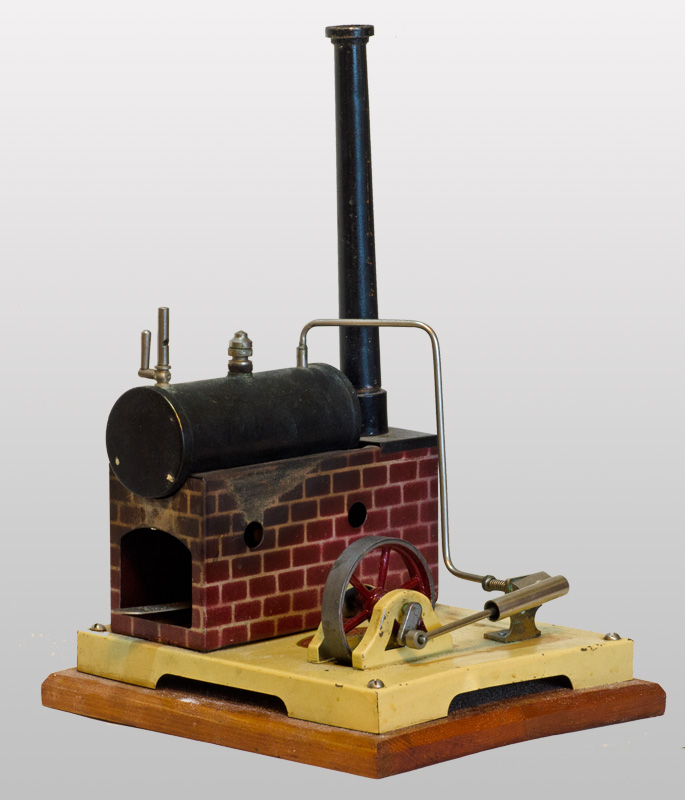 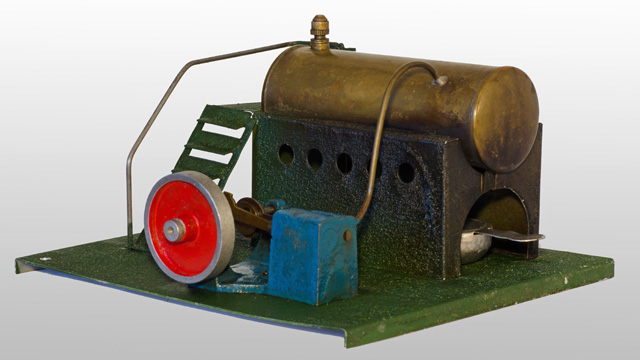 Lemeco founded in 1948 by Rune Heurlen. They resided in Hagersten, a suburb to Stockholm, until sometime in the early 1960s when they moved to Örbyhus in Uppland.

In the catalog of 1950 is a steam engine and various accessories in the form of simple machine tools and electric motors. The accessories and electric motors are also seen with the name Selka. It is unclear if this is the same company or if these were sold off to another company. Lemeco is otherwise best known for their plastic toy cars and board games. 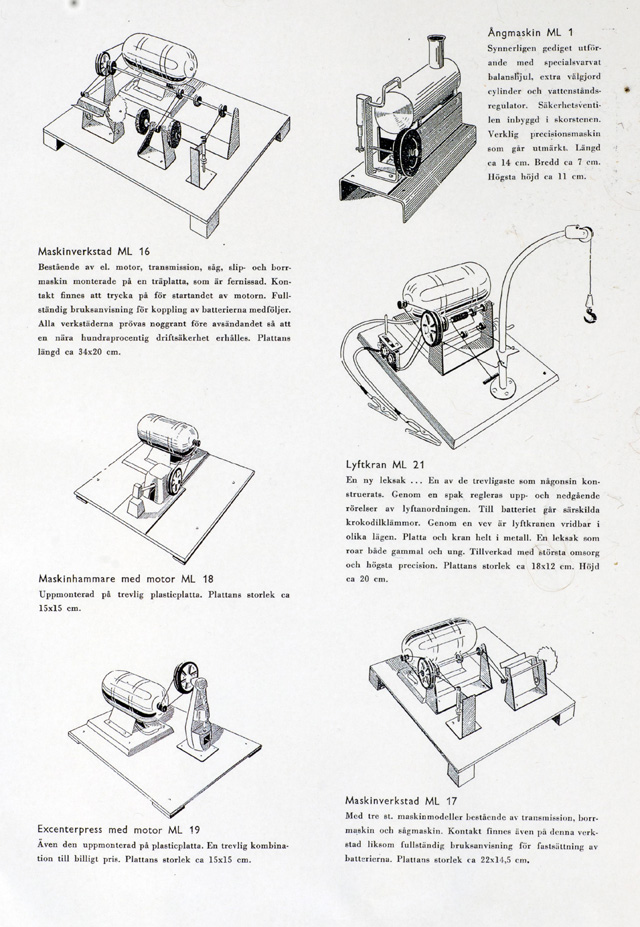 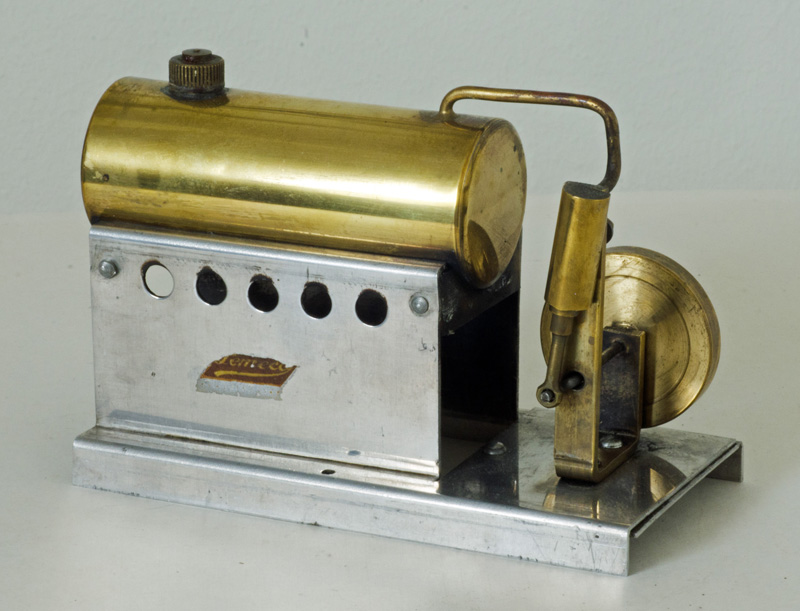 Machinator based on Lidingö outside Stockholm was active between 1945-52. 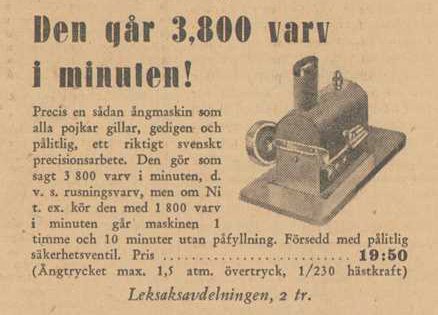 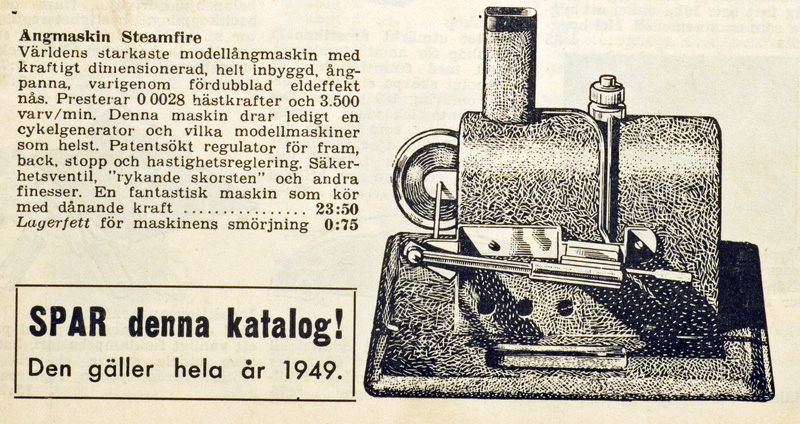 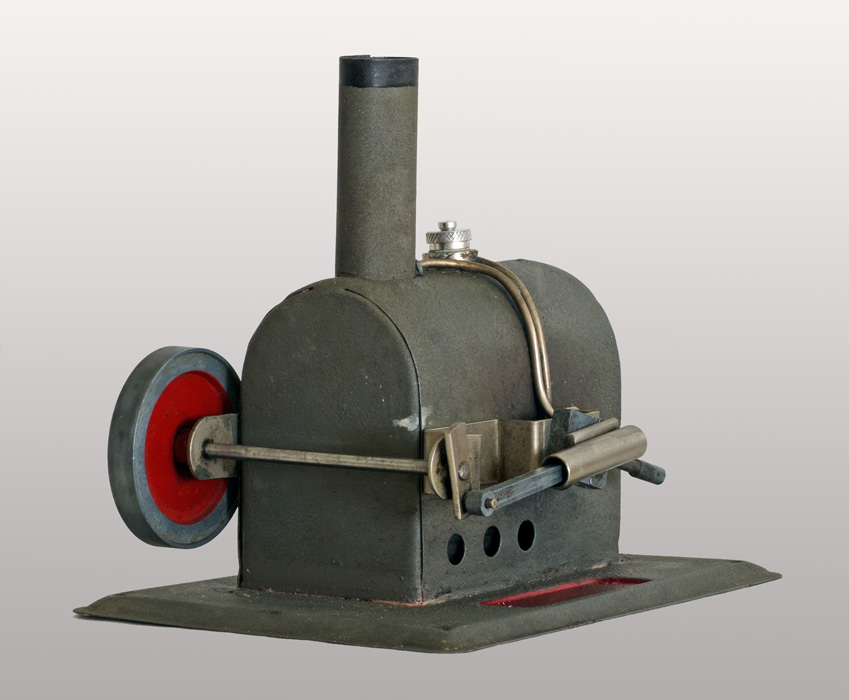 PAF - Made in Sweden

Probably active during the late 1940s and 1950s. In addition to the machine to the right they also produced a simple oscillating machine with base in sheet metal.

A steam engine which might be Swedish made, although I have not found any references to it. One odd feature is that it has no safety valve, instead it has a threaded screw in the chimney that is used to fill water. It is probably not a scratch built as I have two different examples of it.

This steam engine was sold by Clas Ohlsson 1947-48 both as a finished machine and as a kit. I have not found any additional information on the manufacturer, but it may very well be Swedish made.

This steam engine was sold by Clas Ohlsson 1950-51 both as a finished machine and as a kit. I have not found any additional information on the manufacturer, but it may very well be Swedish made. 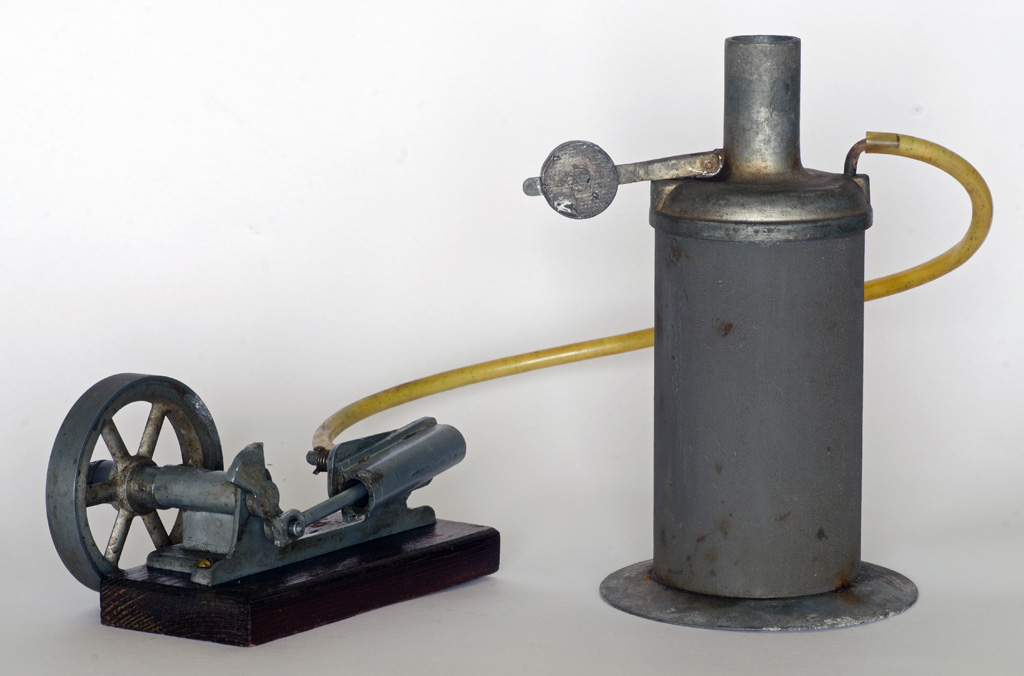 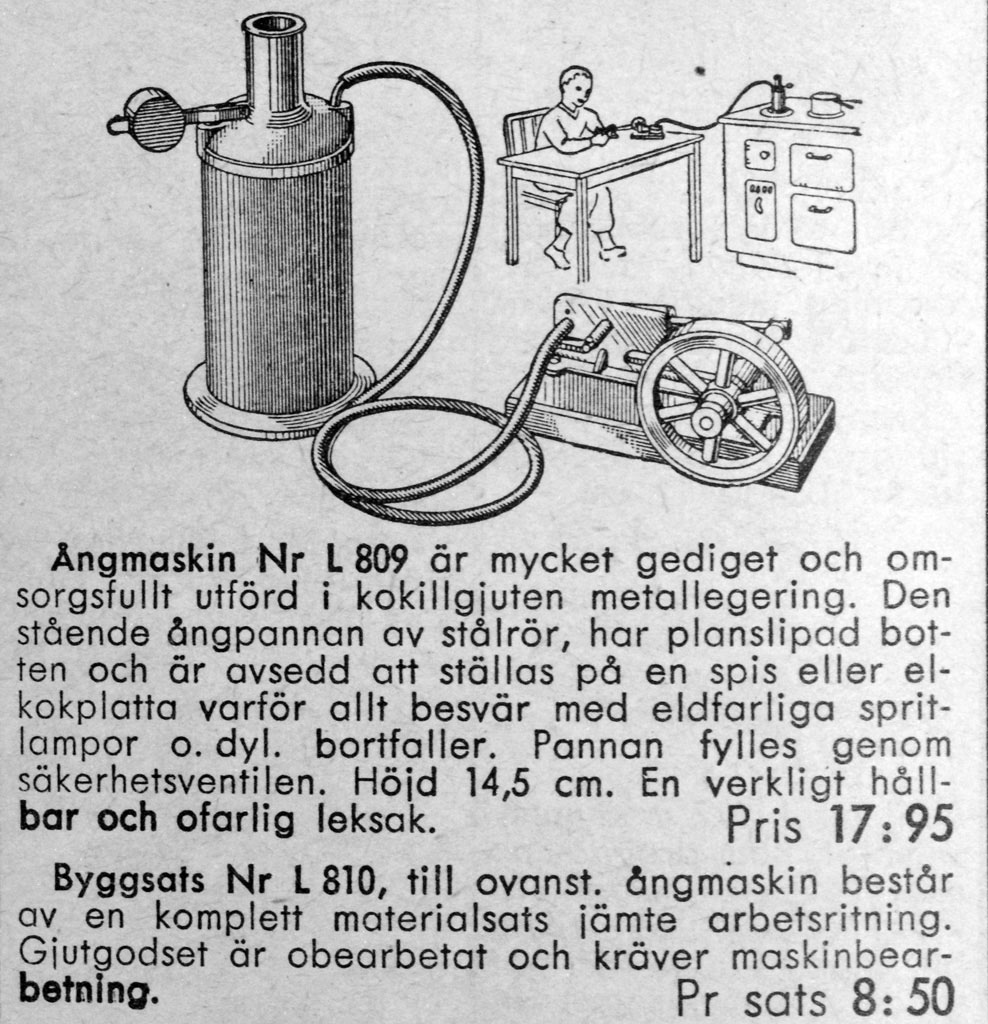 In 1975 the Alga John Ericsson is introduced to the Swedish market. To my knowledge no attempts have been made to manufacture toy steam engines in Sweden later than this. Today all commercial toy steam engines are imported from Wilesco and Mamod. There is also the more hobby-like machines from Stuart in England and Saito in Japan.

In 1975, with a market that is largely dominated by the two major manufacturers, Wilesco and Mamod, the Swedish company Alga launched its own steam engine named after the great inventor John Ericsson. The machine is built with safety in mind, and despite an interesting design it had difficulties competing with the others. The production ends a few years later. The machine is available in Clas Ohlson catalog from 1977-78 at a price of 210 crowns.

In addition to the steam engine they also made some accessories in the form of a grinder, a lathe and a transmission.

Click here to see more about Alga and John Ericsson. 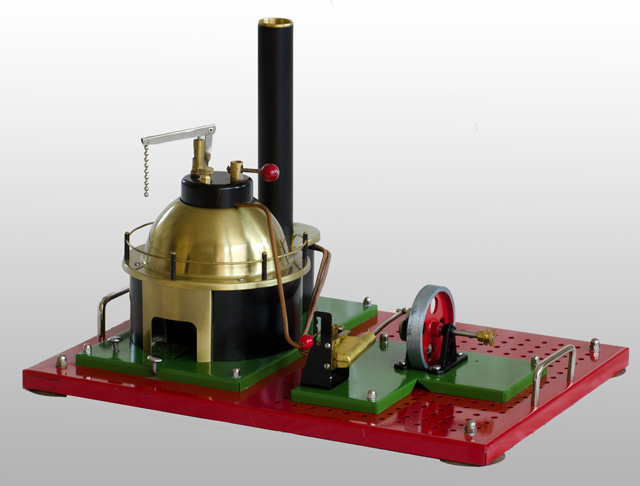